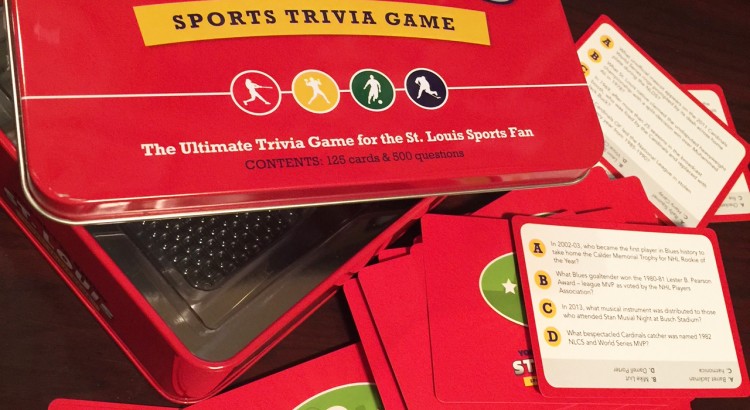 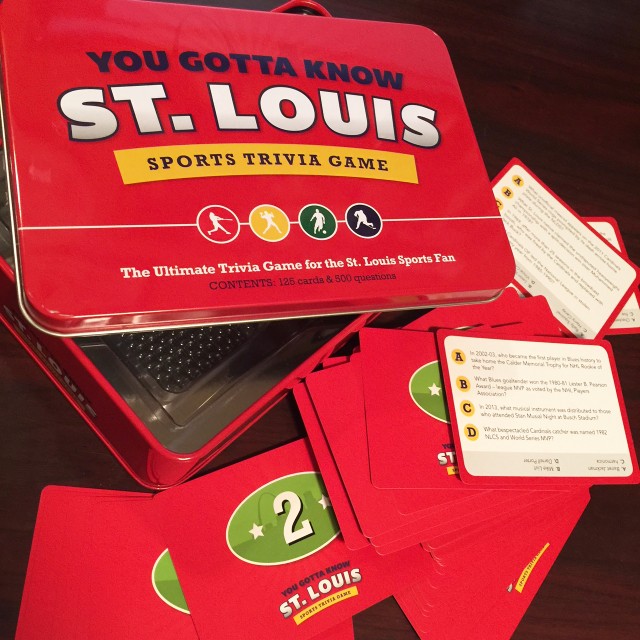 Hey all you St. Louisan holiday and birthday shoppers! I grabbed this great game called You Gotta Know St. Louis Sports Trivia Game. It is perfect for any St. Louis sports fan, or any sports fan in general. It is a great gift that this St. Louis Dad recommends picking up this holiday season.

There are so many great questions to keep everyone entertained for hours. The game is pretty simple, it’s trivia! There are 125 cards with 500 questions. You ask questions and other people answer them. Keep track of the points and whoever gets to 21 or whatever number first wins.

You can pick this game up from Amazon for pretty cheap. It’s a nice bargain for some great trivia questions specific to St. Louis.

So much history has happened here in St. Louis and wrapping it up in a game like this is a fantastic way to preserve that history. Over 500 questions that are about hockey, football, baseball, and more! You Gotta Know St. Louis is a perfect gift to add to your cart this year.

You Gotta Know St. Louis is the addictive sports trivia game made just for the St. Louis sports fan. With 500 questions, there’s something for everyone from the casual fan to the obsessed sports geek. Baseball. Hockey. Football. Basketball. Players. Coaches. Trades. Draft picks. Numbers and records. Buildings, ballparks, and arenas. It’s all here. Each card has a point value (based on difficulty) for easy “race to 21” game play… or just ask the questions to your buddies while you’re drinking beer.

If you are looking for something for that sports fan, or you’re curious to know what unofficial mascot appears on the 2011 Cardinals World Series rings prompted by its dash across home plate during the NLDS? Or what St. Louis native claimed the undisputed heavyweight championship with a split-decision win over Muhammed Ali in 1978? This game is for you.

My wife, she doesn’t know much about St. Louis sports trivia, but my buddies do. So this game will be great to play when we get together. Maybe my wife will learn a few facts as well. Who knows, I’m just excited to play!

To My Kids, Thank You for Making Me a Dad