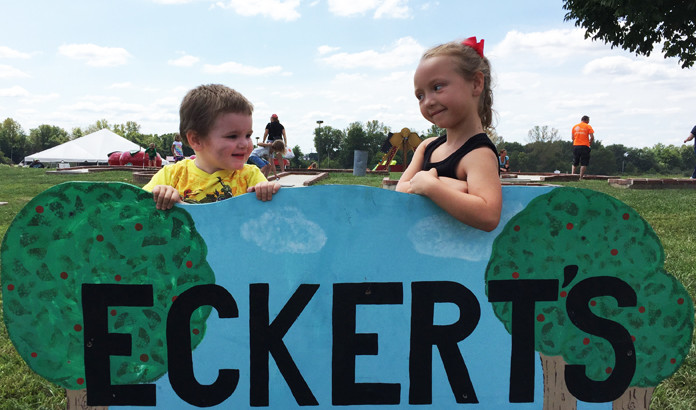 Today was one of those days that just could not have gone any better. With two kids and an adventure out in public anything can happen. Lucky for my wife and I, today was that rare exception where both kids were awesome, and as their dad, I could not be prouder of my two little clones.

I was invited out to Eckert’s in Belleville, Illinois with my family to check out the beginning of Apple Fest! We had a full day of things to do at Eckert’s. My wife and I were thinking maybe two hours, but nope we had a beautiful day full of fun. The morning started out a little squirrelly than others. I am guessing the kids knew the sun was shining and we were making our way out the door. The kids already had me a little suspicious, they had been a little too ancy to get out of the house, but for the most part they had been awesome all morning. I figured something might’ve been up. I just wasn’t sure what their plan was. Those two kids come up with some crazy ideas, so I was on guard.

10 A.M. was our goal for arrival time and we actually arrived early. I was very happy with this. We make it on time, most of the time, but sometimes we’re late. Two kids can sometimes be a handful to get ready. But today we made it early enough that we figured why not make a lunch reservation so we didn’t have to wait once we were ready to eat. This was our plan after all. At least we tell ourselves that. After a quick run down of the rest of our pending plans for the day we were off on the tractor to pick some apples!

Eckert’s had Johnson and Gala apples ready for the picking. There will be other varieties available in October. Be sure to check out Eckert’s website for when their different crops will be available. After a quick tractor ride to the orchard we got down to business picking some Johnson apples. Our goal was to get around 10 pounds of apples. My wife and I have a few plans for these which I plan to write about in a later post. After picking some tasty apples (we know, we tried one in the orchard!) we headed back as it was just about time for our lunch reservation. We could tell the kids were ready to eat with how fast they were munchin’ on the apple we gave them. So into Eckert’s Country Restaurant we went. Just in time for us to get seated immediately. That was the best part! A pro-tip from this dad is that if you are at Eckert’s and plan on eating after some apple picking, make your reservation before you go picking!

Lunch at Eckert’s is always amazing. This go around I had a pull pork sandwich with an awesome apple butter bbq sauce. It was so tasty. My wife ordered a chicken pot pie which she said was delicious. It must have been since she finished the whole thing. Surprisingly, both of my children ate their entire lunch. They must have been either famished or Eckert’s just has the special touch that got my kids to finish their plate.

Let me also mention the biscuits and apple butter. O-M-G. My little picky daughter got in on some apple butter action. I was afraid she was gonna fill up on it so I had to slow her down. So and in a grilled cheese and hot dog, and now Abby and Alex were energized up for the rest of the day playing in the Fun Corral.

Every Saturday and Sunday in September Eckert’s is having Apple Fest. Pick apples, get some lunch, and then let the kids go crazy riding carnival rides, ponies, a camel and more! We got six tickets for the kids to use on some carnival rides. We also knew they wanted to ride either the camel or the ponies, but they took their time to decide. The first ride the kids enjoyed was the train. Alex is a trainiac, so it was a lot of fun for him and his big sister to ride together without mom and dad. Next up was the pirate ship. Mom had to ride this one so Alex could go too. That’s okay, my wife loves a good carnival ride. Because mom used up a ticket, Abby used the last ticket to ride the ferris wheel. She was hootin’ and hollarin’ inside the yellow cage about how awesome it was and that she couldn’t see our car. That’s okay kid, neither can I down here.

After the last ride the kids had made their decision. The camel didn’t make the cut, so it was off to the ponies for a nice relaxing ride in the shade. My wife thought Alex would freak out on the horse but he had a blast. Abby thinks she’s a princess when she’s on any sort of horse. I’m sure she’d love a pony from Santa this year. I might have to check the animal laws around my neighborhood. 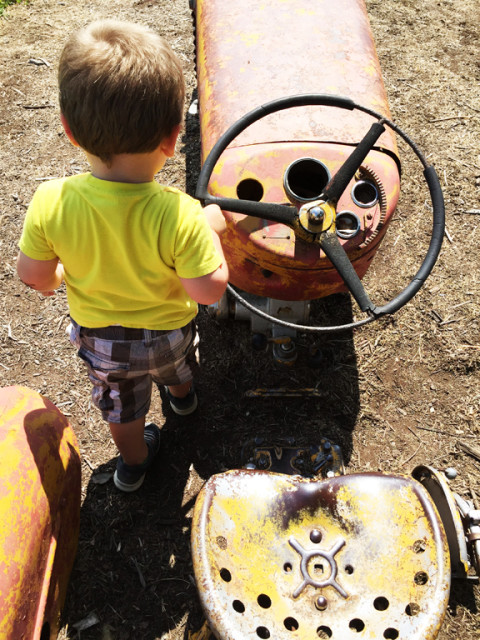 e could have bought some more tickets to ride a few more rides but there are also things you can do that do not require any sort of tickets. Eckert’s has a little mini golf course setup that kids can try to putt around on. There is a huge sandbox that is always a popular option. Especially for my kids. It’s hard to keep them out when walking by. There are so many different photo opportunities and things to explore with your kids that it doesn’t have to be all about the carnival rides and bounce houses. They are awesome, but getting dirty in the sand with your kids is just a fun sometimes.

Finally using up the last bit of energy our lunch provided we had to grab some frozen custard. The menu is huge and the toppings are vast. However, I am a simple man, so I went with a plain vanilla, while the kids went just a little crazy with gummy worms and mini M&M’s. It was a nice way to top off the day. My wife and I had a blast with the kids and made many memories today. I know the kids had an eventful day as well because they both passed out on the ride home. Once home Abby asked for another apple, so I obliged. They’re just that good. 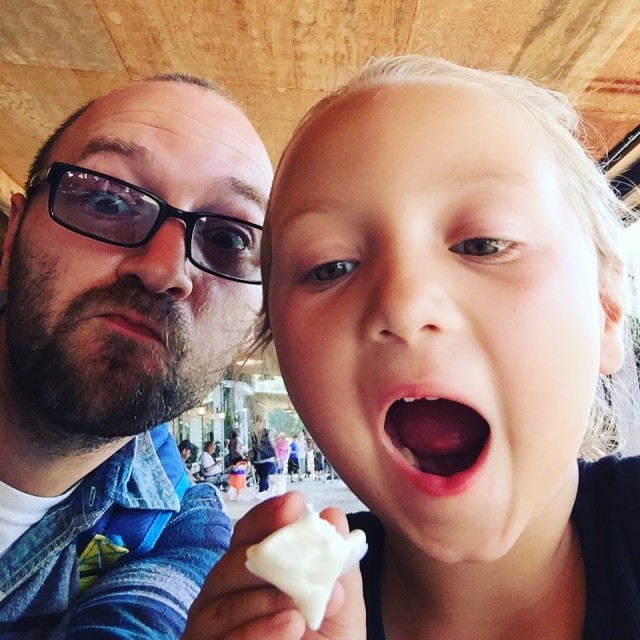 Now that you have made it this far into my exciting adventure at Eckert’s then I’ll let you in on a little secret. Follow me on Instagram and watch for a special post for a chance to win a $25 Eckert’s gift card later this week. It will be obvious when I post it, but you will have to follow me, like the photo, and follow Eckert’s on Instagram as well! 24 hours later I will make a list of everyone who liked the photo, verify they are following Eckert’s and will randomly select a winner. I will contact the winner and they will have 24 hours to respond before I select another, so on and so forth.

I would like to thank Eckert’s for the awesome day today and I think that if you haven’t been to Eckert’s to pick some apples and have a bite to eat, then you definitely need to find some time. It is well worth an adventure to Eckert’s, even if you don’t bring the kids.

Eckert’s provided St. Louis Dad with complimentary vouchers for Apple Fest in exchange for social media posts and an honest review of the days events. Check out Eckert’s online and be sure to follow them on Instagram!