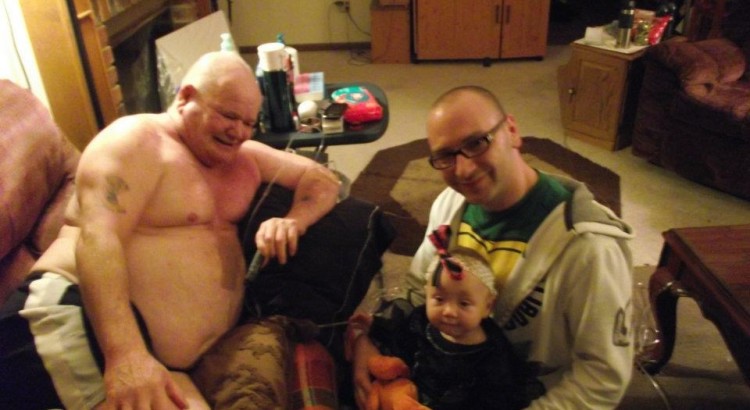 This week we have been saying goodbye to another member of our family. Michael Richard Reynolds was an amazing grandfather to my wife Destiny and everyone else on her side of the family. He passed away on Wednesday October 28th. His memorial service will be this coming Saturday and should be a great way for family and friends to share memories about Grandpa. I am actually working on a memorial video for the service. I have collected hundreds of pictures and a few video and audio clips that I hope will bring some smiles to everyone who views.

It’s hard to explain to my daughter why mommy is upset and crying. I’ve talked to her about Great-Grandpa and how he is no longer with us, but you can tell that she doesn’t exactly understand. I’m sure I could probably explain it in a different way but seeing the tears on my wife’s face stopped me from taking the conversation with Abby any further. When she is older she will understand, but for now it’s okay to not know exactly what is going on.

“Grandpa was special to me because I could do no wrong in his eyes.  I never felt judge when I was around grandpa.  I never felt like I had to prove to him how much I loved him or cared for him.  And he was special to me because he was my Grandpa.  He was the only REAL Grandpa I have had in my life.  He gave you candy even though dinner was going to be done in 5 min, he made jokes and made me giggle, you could always count on him to answer his phone and a long conversation about anything and everything that came to his mind… He taught me to always be a kid at heart and to never lose that kid like presence.  I don’t have a single memory of him that doesn’t involve him acting like a 9 yr old boy does.  From sticking his tongue out at Grandma and Aunt Kim, to always having his hand in the candy dish.  Grandpa was special because he blessed me with you as a father.I believe I was special to grandpa because being the first granddaughter helped soften him up just a little more.  I also believed Grandpa loved that I took after him and picked up a camera and loved taking photos.  And I know I was special to Grandpa after Grandma passed always because I reminded him of her when he looked at me.” 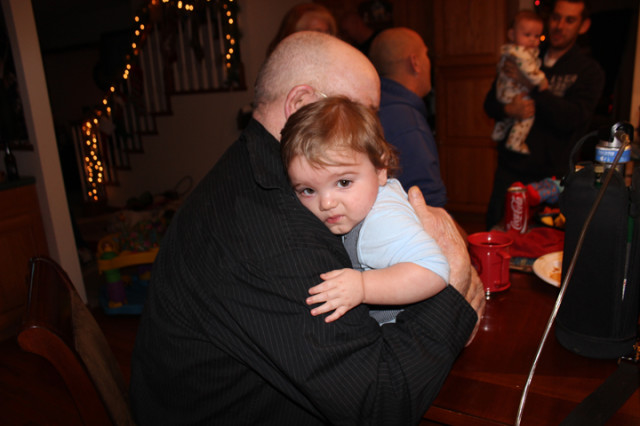 With her voice breaking she read to me what she wrote, and it is heartbreaking as you watch someone you love have tears rolling down their cheeks as they speak about their dearly departed. With Grandpa Reynolds gone it saddens me as well. I may not have known him for as long as my wife but he’s been a part of it for the better part of 15 years. I would always enjoy talking about movies and t.v. shows with him. He knew his stuff and it was impressive. Doesn’t matter if it was a movie that has only been out a few weeks or a movie that has been out for a few decades, he knew all about them.

He will surely be missed by all of his family and friends. His life has impacted so many and I am proud to have known Michael “Grandpa” Reynolds. I leave this post with a copy of Grandpa’s obituary and a link so you can read all of the generous and beautiful comments left by all of his friends and family.

Reynolds, Michael R., of St. Peters, MO, died on Wednesday, October 28, 2015, at the age of 70. He was the loving husband of the late Shirley A. Reynolds; beloved son of the late Paul and Mary Brady; devoted father of Kimberly (J.R.) Like, Michael (Kimberly) Reynolds, Richard Reynolds, Thomas (Angela) Reynolds, and Jay (Tammy) Reynolds; cherished grandfather of 13; treasured great-grandfather of 7; and dear brother of William Brady and James Brady. He is preceded in death by his son Kevin (Tammy) Stearns, and his brothers Everett J. Reynolds and John (Peggy) Brady.

Michael enjoyed working with his hands. He was a self-employed contractor who remodeled homes in the St. Charles County area. He also enjoyed woodworking and gambling at the casino, in his spare time. Most of all, he loved to spend time with his family and his friends. He will truly be missed.

Memorials may be made to the wishes of the family c/o Kimberly Like.