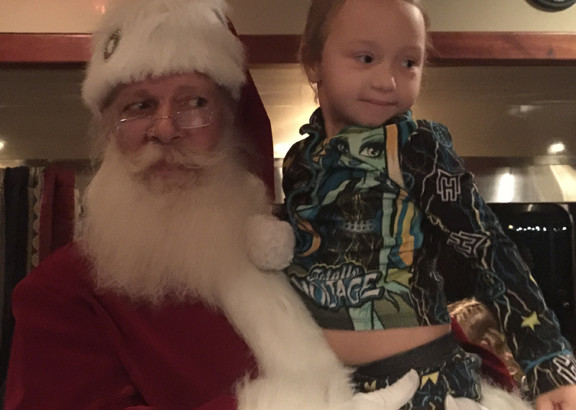 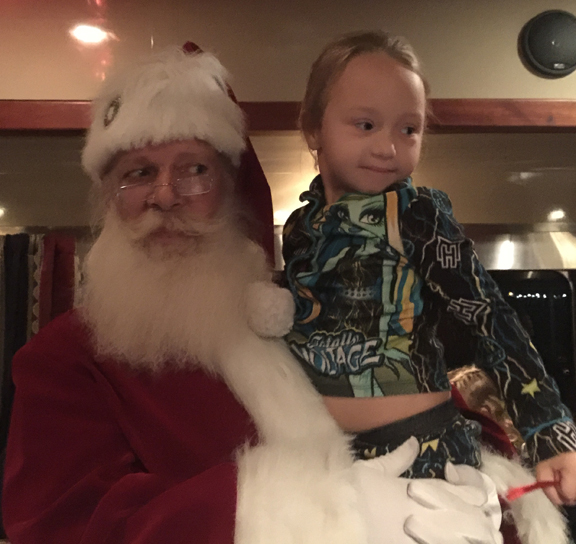 The Polar Express rolled into St. Louis again this year and this past weekend my family and I had the opportunity to go downtown to Union Station and experience the fun. Our Sunday night consisted of the Magical Holiday Dinner & Show as well as The Polar Express train ride. The dinner and show started at 5PM and the train ride was at 6:30PM. We had planned everything perfectly and the timing could not have been more perfect.

We left our house at 4PM and arrived at Union Station at 4:30PM. We weren’t exactly sure what the procedure was so when we stepped into the mall we asked the kindest little elf which way we needed to go. She was so helpful and got us on our way. If you are going to the dinner and the train ride I would highly recommend getting to Union Station at least 30 minutes before your dinner starts so you can park and also get in and get your boarding pass and tickets ready for the train ride before you eat. There will be many more people just riding the train and not eating dinner so it will save you time after you eat so you don’t have to get your passes. 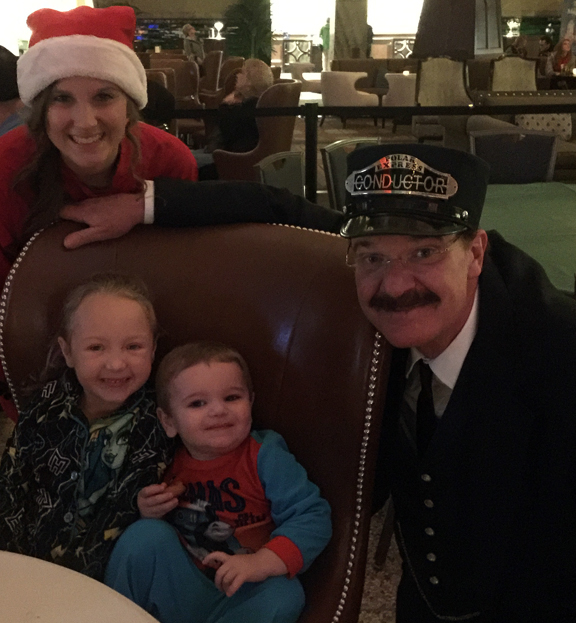 After getting our boarding passes we took a few photos and then headed down to the Union Station Hotel’s Grand Hall for the Magical Holiday Dinner & Show. This was essentially a buffet style dinner with a plethora of food choices all set in the Union Station Hotel grand hall. The ceiling was lit up with a colorful light show set to an exciting soundtrack of holiday music. The buffet food was really good. As a picky eater there was plenty of food that I really enjoyed. There was also a good amount of choices for those that are not as choosey as I am. The kids had chicken strips, mini cheeseburgers, corn dogs, tator-tots, and mac and cheese. It was all so good. Along with a dessert tablet filled with cookies, candies, cupcakes and more… We definitely got our fill of food and got to enjoy an amazing show filled with lights and sound. If you are hungry for a buffet style dinner with a great selection of options I highly recommend checking out this awesome Magical Holiday Dinner & Show before your ride on the Polar Express. My wife and kids had a fantastic experience and with the courtesy presented by the Union Station staff I would love to do it again this year. 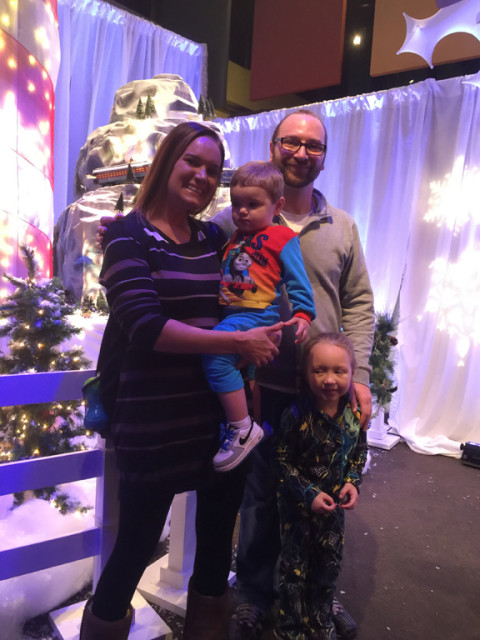 After we got our fill at dinner we headed back down to where you get your boarding passes and did some of the cool activities there before our train was set to depart. My recommendation is that if you are not getting the dinner and will just be riding the train, get to Union Station about 60-90 minutes before your boarding time. This will allow you plenty of time to do all of the fun activities available. We planned it out perfectly and while there were many more people at the depot than when we were there earlier, we still had plenty of time to write a letter to Santa and mail it off. We also took some cute pictures, and also checked out the balloon artist. The kids had a blast running around and checking out all of the cool activities. Alex seemed a little more interested in the giant blow-up snowman hanging out in the mall more than coloring or writing letters, so we let him run off some steam while we waited to board the train. Once it was time to board the train we lined up with the rest of our train car and waited patiently for our turn to board.

We were in the North Pole car this year and followed our elf representative to our car and was seated promptly at our table. There are three class of tickets you can get for the Polar Express train ride. We were fortunate enough to ride in the premium car that had a table. This was nice as it gave us a place to put our hot chocolate as well as our bags and coats that we had with us. With Alex being so little I feel like this really helped us instead of having to have him sit in a regular seat. It gave the kids the ability to move around just a bit without being too constricted to a seat.

Since I mentioned hot chocolate it did not take long for the fun to begin on the train. Almost immediately as everyone was seated the servers started rushing out that hot, hot, chocolate! Because we had premium seats we got our hot coco in a closed cup but it came with an awesome Polar Express mug. I believe the mug is only available for premium and first class tickets, so if you are in coach are looking for a mug you may want to talk with someone in the gift shop about purchasing one. 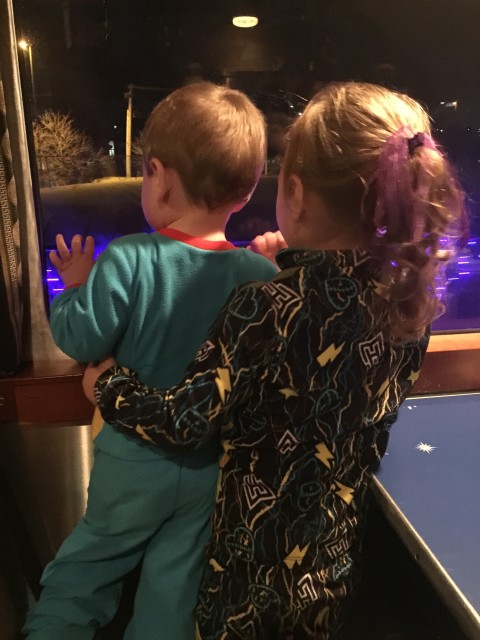 Anyways, once we got our hot chocolate the conductor came around to make sure everyone’s ticket was punched and once that was finished we were on our way to the North Pole. The train ride started with the story of The Polar Express being read over a loud speaker but with the servers holding up several copies of the book so all the kids could follow along. The servers were amazing. They interacted with all of the children asking them to help turn pages, giving high fives, tickling and making sure everyone was having a good time. Abby and Alex loved when they would rush by singing or holding the story. They gave high fives and were so excited when they would give them some attention.

Once the story ended we stopped at the North Pole and picked up a special passenger, Santa Claus! He came on board and greeted each and every child on the train. He took time to take pictures with everyone and even gave them their first gift of Christmas! A shiny magical Christmas bell. Abby and Alex both loved seeing Santa, with Abby even more excited than all of her previous years of meeting the jolly old man. 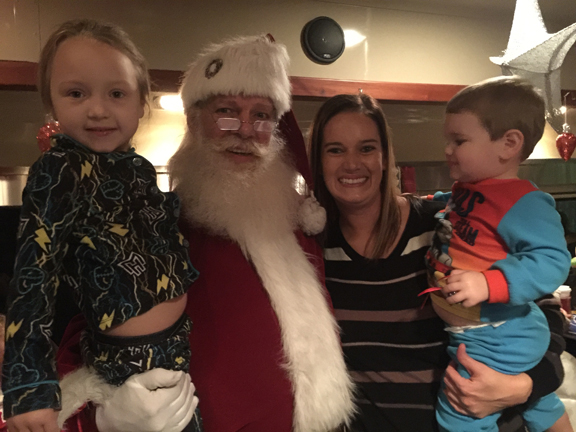 Once Santa left our train car we started heading back to Union Station and this is when the fun really started kicking in. There was music and dancing and I think there was even something that was like a conga line. The kids had a blast belting out the Christmas carols and then when songs from the movie Frozen came on, you would have though Queen Elsa herself was on board that train. Every single kid, girl and boy was singing the music from Frozen. It was so cool. I think even my wife Destiny got in on that action. I know she loves to “Let it Go”.

We arrived back to Union Station and unloaded from the train. We browsed through the gift shop and then headed back to our car. Both kids were very tired and ready to go home. All of the fun and excitement from the train just wore them out. Alex was asleep before we even hit the highway and Abby was out pretty much when we got home. It was an amazing evening and a big recommendation for anyone in the St. Louis area to check out the Magical Holiday Dinner & Show as well as The Polar Express train ride. Many memories were made at this event and I hope you and your family has just as an amazing time as we did. Did you ride The Polar Express? Share your experience below, tweet it to me, or share it on my wall!

St. Louis Dad was provided with these products as compensation in exchange for an honest review. Check out the event on Facebook and visit stlpolarexpressride.com to get your tickets before they sell out!

Enjoy a Ride on the River with The Gateway Arch Riverboats Sunday Brunch!

10 thoughts to “All Aboard The Polar Express!”