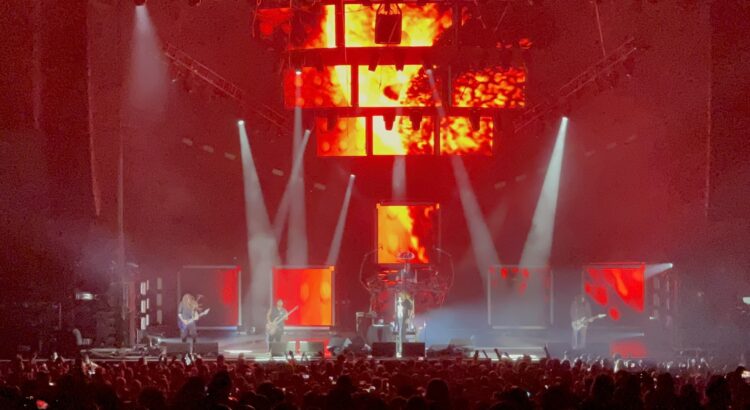 Nu Metal pioneers Korn made their way to St. Louis at the Hollywood Casino Amphitheater recently and I was finally able to check something off my bucket list that had been sitting there for years, seeing Korn live in concert.

Korn came into my life when I was in middle school. You know, those years spent developing yourself and realizing that not everything is as bright and colorful as elementary school would have led you to believe. Korn’s self-titled debut and the follow up Life is Peachy provided me with plenty of sounds and lyrics to analyze.

During this time, my parents’ relationship had already started to fall apart. My dad was drinking way to much and my mom was not having any of it. If you recall my post about DMX, you’ll know that music helped me through what should have been an important developmental time period in my life. Korn kept me going through the same strife I was facing in life.

Eventually, my parents divorced and my father died from cancer… Korn’s Follow the Leader came out a little before this time and was my blueprint for getting through it all. I kept my smile when around friends and family, but deep down I was torn apart and did not have anyone checking in on me. During my father’s funeral I remember riding with a couple of my friends at the time and we had the Follow the Leader album playing. As we pulled into the cemetery, Dead Bodies Everywhere started playing. I distinctly remember commenting on the song playing and where we were and thought it was hilarious. To me, it was a sign that I’ll be okay, and having a band like Korn to help release frustration and anger is exactly what a little freak like me needed at the time.

Korn continued to help push me through high school, allowing me to express my individuality in ways that I probably shouldn’t have, but did anyways. I didn’t know any better and my up bringing was falling apart, so I was just doing the best I could do, with what I had at the time.

For Christmas after my dad passed away, my cousin got me the album Issues. I was in love with the band by this point. I thought the cover contest for this new album was the greatest idea ever! Once I unwrapped that plastic and popped the album in my CD player I listened and absorbed it all.

I listened for hours on repeat. I listened in between Tony Hawk Pro Skater sessions. So far these four albums by what I considered to be the greatest band of all time kept me afloat and surprisingly, they kept me grounded. A few albums later, and missed out Family Value Tours, I knew I had to see Korn live at some point in my life. It just never worked out for me early on in their career. No money, out of town, cancelled shows, and then finally at 37 years old, I got to see them. I was worried about Covid and hearing J.D. recently got infected, I was expecting them to cancel again, which would have been okay, but I am so glad his health bounced back quickly and they were able to stop by St. Louis with Staind!

The drums, the bass, guitars, and vocals were loud and intense! My wife and I got two seats, right in view of center stage and once it all began something magical happened. The grief and pain that I held onto for 20ish years disappeared. The best I can explain it was out-of-body. The emotions I felt watching and singing along with one of my favorite bands of all-time was therapeutic and euphoric. I woke up the next morning, and even now, a week later, I feel closure. I feel a freshness, a freedom. Something I have not felt in such a long time and it almost feels super-natural.

Seeing Korn perform live crosses another item off my bucket list. It also did wonders for my internal happiness and mental well-being. Breaking a cycle of self-loathing, sadness, and grief, that I had been dragging along with me for decades. I never expected to feel this way about a band, but Korn got me like whoa, and I cannot be more thankful.