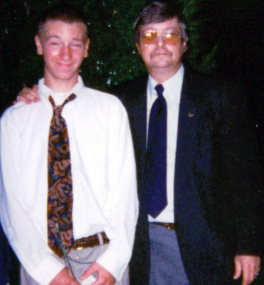 Fifteen years ago my dad passed away. He had lost his battle with cancer and went on his way. I think about him often and how things have changed since the last time I seen him. I wonder what he would think about mp3s, blogs, and the internet in general. Then there were no iPhones or Spotify. Facebook and YouTube was nonexistent. Phone books were how you looked people up, and you were lucky to get a hour out of your Walkman back then.

More than likely I can see him really liking it. When I was younger my dad would make radio show style mixtapes of classic rock music. He would have some comedy bits played between and have this whole production laid out for each tape. This is old school style of making a podcast. Except not many people heard his tapes. They were made as gifts for family. As time passed most of these tapes have been lost. I personally only have two. Check out a little preview below.

Happy Father’s Day Dad. I know you would have loved the way things have progressed. You would have been an awesome grandfather to all of your grandchildren. You are forever missed, and I hope one day I will get to see you again.

15 years and still miss ya. #ripdad

Common Dad Injuries You Need To Know About