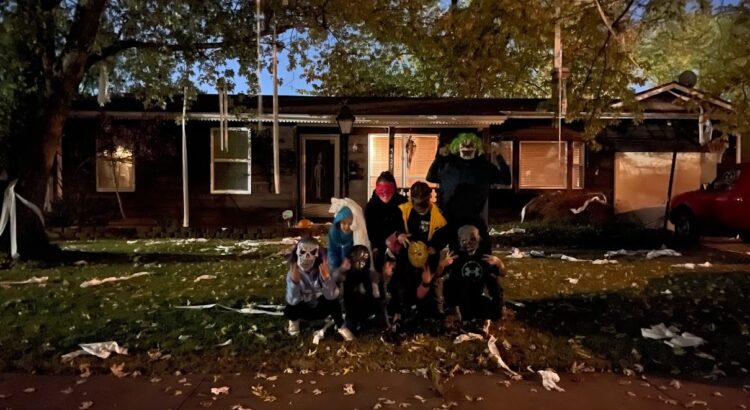 Did you know that October 30th is Mischief Night? We did and while we do our best to be good, I can’t say the same about my kid’s aunt and uncle.

It has now been two years running and they have taken it upon themselves to be the self-proclaimed King and Queen of Mischief Night. Armed with rolls and rolls or toilet paper, silly string, and window markers, this band of mischiefs ran all around the area causing mayhem leaving a path of T.P. behind them all along the way.

Surprisingly, I am totally okay with it. I think it is all in good fun, and the memories these kids are making are priceless. My son didn’t even want to participate because ya know Santa is always watching and there are some toys he is really wanting to get for Christmas. We made sure he knew before he left that there would be no worries from Santa and that he will probably think it’s hilarious to prank our family.

The clean up wasn’t as fun. I spent the next morning, bundled up and filled up FIVE grocery bags of toilet paper. Maybe next time my wife shouldn’t bash their T.P.ing skills, because maybe we would have gotten off a little lighter than what we did. Either way, the kids had an amazing time with their aunt and uncle making some awesome memories.

Clean up has been completed and the Halloween candy has been handed out. The ghosts and goblins of the spooky month of October have gone back home and will do their spooky thing until October rolls around in 22. I am so thankful for wonderful family that enjoys doing silly stuff with the kids, because anything else would just be rather boring.

Why Should Mom Have All The Fun?