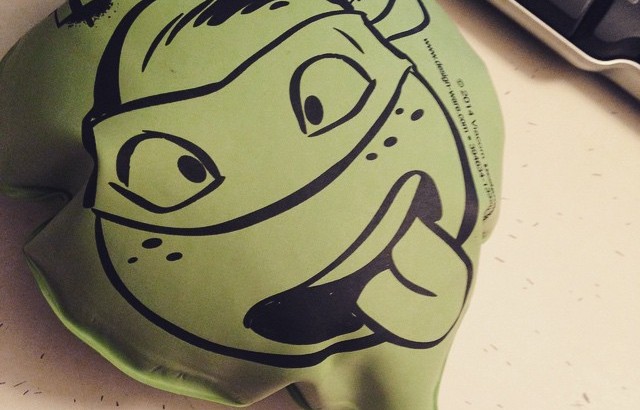 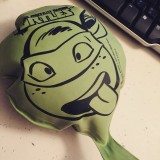 My wife and I recently went to Party City to pick up some supplies for Alex’s first birthday party next weekend. While we were there it was my job to find some trinkets for the goody bags. Immediately I headed over to the Teenage Mutant Ninja Turtle items. There were some really cool little toys. Some finger puppets, Rubik’s cube, bubbles, crayons, etc… What I found on the bottom of the rack though is something that I haven’t played with in a very long time. A Whoopee Cushion. A Teenage Mutant Ninja Turtles whoopee cushion at that! The best part is it was only a dollar, so what did I have to lose? And who was printed upon the green bag of joy? Dr. Prankenstein himself, Michaelangelo.

Upon arrival home I had to show my new toy to the kids. Alex fell asleep so I was left with Abby Doodles to bear witness to the greatest invention ever. I took the cushion out of the package and while Abby pondered the peculiar object I filled it with its precious fuel, air. Now this is where the fun begins. I set the cushion down on the chair and asked mom to have a seat. She happily obliged and let out a loud air biscuit. Maniacal laughter began pouring out of little Abby’s mouth and already it was requested to fill the cushion again, and again, and again.

There’s something to be said about the sound a whoopee cushion makes. It’s just hilarious to kids. Even some adults such as myself. I had so much fun with my daughter for a few hours with a toy that only cost one dollar. I would mark that as a win in any book. Tomorrow Alex will get his chance to fill the house with laughter… and fart noises.

Awesome Ideas For Entertaining The Kids That You’ll Also Enjoy