When I was a very young kid I remember watching some of the greatest action movies ever made. Movies like Robocop, Terminator 1 & 2, and Total Recall. As an kid in elementary school these movies were amazing. The profanity and violence and all around bad-ass of the lead actors kept this He-Man / Ninja Turtle fanatic in constant awe. Looking back and knowing I was in elementary school makes this even weirder. In Robocop there’s a scene where Robocop shoots a criminal in the no-no’s. Should a 7-10 year old be seeing something like that? In today’s standards, no they shouldn’t, but back then life was different. I was never sheltered as a kid. My grandparents would let me and my cousins watch Serial Mom over and over again. We were just kids watching a funny movie, but when you actually watch the movie it is filled with stuff that is clearly for adults only.

Watching these movies as a kid, at least from what I can tell have not caused any psychological issues in me or my friends and family that watched them with me. We are all normal, in whatever ways normal is considered normal. Now that my own children are old enough to start picking movies of their own to watch I have to think about what it is they want to see. More often than not they want to pick a cartoon movie, LEGO Batman is still pretty popular in our house, along with Moana and many other Disney Princess movies. However, there are times when the kids will surprise me with a request that I wasn’t expecting. 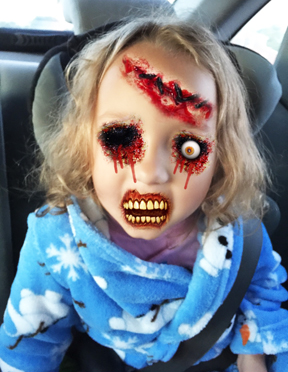 With Andy Muschietti’s IT being a box office smash hit I thought it would be nice to re-watch the original made for TV series. Typically, I will watch something like IT later in the evening when the kids are in bed, but I have seen this one before. It’s long but it’s not really that graphic. There are only a few scenes that are pretty tragic but as a whole based on today’s ratings the original IT movie is maybe a soft PG-13. Stan’s death and a few blood filled balloons are about as bad as it gets. So anyways, I started re-watching the movie and the kids wanted to know what I had on, so I told them and they sat and watched almost the entire movie. All 3 plus hours of it. I was very surprised that they made it through such a long movie but they loved it. To them IT is a pretty scary movie but it wasn’t scary enough for them to come crawling into our bed at night. We have actually gotten a few more requests to watch IT again and while I’m not opposed to another viewing, I think it might be time to introduce a few other mature movies to them.

Alex, just like Abby when she was his age, is starting to become obsessed with zombies. I think Minecraft helps with that in some degree but Alex is all about wanting to watch a zombie movie. After looking through my collection, I knew I had plenty of options but I wanted to show him something that wouldn’t be too graphic but still satisfy the zombie request. So first I went with Michael Jackon’s Thriller music video. Just to give him a taste of something scary without it being too scary. Him and my daughter loved it. They started dancing and trying out the routine from the video, but apparently that wasn’t scary enough for them. They recognize that the actors are just wearing costumes and makeup. I feel like that is a good indicator of how well they will handle a real zombie movie. The fact that they know they are actors in costumes helps bring them back to the real world if ever they do get scared from a more graphic scene. So with the kids begging for more zombies I figured it’s time to start a re-watch of The Walking Dead.

You may be thinking that was a big mistake, it wasn’t. 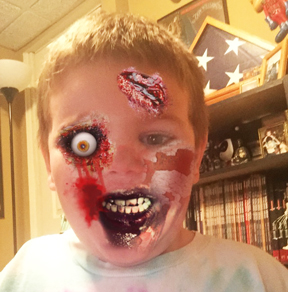 The kids are now asking to watch movies that arn’t cartoons. Which helps mom and me to not go crazy watching LEGO Batman for the 200th time. The other night I let the kids pick a movie for us to watch as a family. They picked Peter Jackson’s rendition of King Kong. A three hour epic was the movie they wanted to watch. I told them it was long and that there were dinosaurs, bugs, and many other exciting creatures in the movie, that’s all it took to hook them in. It is fascinating seeing my kids react to King Kong. First they were scared, then they felt sympathy for King Kong when he was getting bit by the dinosaurs and then finally empathy when they saw the humans take him down. They were sad when he finally succumbed to the pain and died. Alex and Abby both seemed to understand why King Kong was doing what he was doing. He was in love and knew he had to sacrifice himself to protect his human and they picked that up, which to me is awesome. 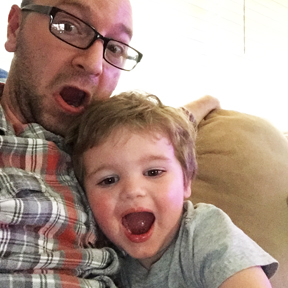 King Kong isn’t a horror movie, but it does hit some mature tones and has some creepy parts in it, but my children just loved it all. With that being said, I feel like they are ready for more options when it comes to movies they watch. Don’t get me wrong here, I wouldn’t let them watch Saw or another very graphic movie in the same vein. Some other movies that show a lot of hanky-panky will be kept off the list for now as well. I do not think they are ready for those. They probably arn’t ready for Robocop or Serial Mom either, but maybe Terminator. It’s just a judgement call, how mature are the kids, can they handle the visual imagery, the story, and emotional tones found within the movie? If I feel like they can, then I don’t mind them watching. I’m always right there with them anyways. If they get scared or have questions, I do my best to answer them or show how it’s just movie magic. You can tell they appreciate that because when you explain something is really a puppet or a costume then they start thinking about how they can create their own.

Both of my kids are very imaginative and I’m not worried about showing them some safer mature movies. There are plenty that they won’t be allowed to see until they are much older, such as Serial Mom, but I think Terminator and many others are good to go with these creative kids. Plus I am excited that I can finally sit and watch The Good The Bad and The Ugly with my kids around. I like the idea of my children being ready for whatever and have a good understanding of how the world works. I know movies are not real and I want these two kiddos to know that too. They are not going to be sheltered from the finer things in life and honestly I don’t think I can watch LEGO Batman again for at least a few years.