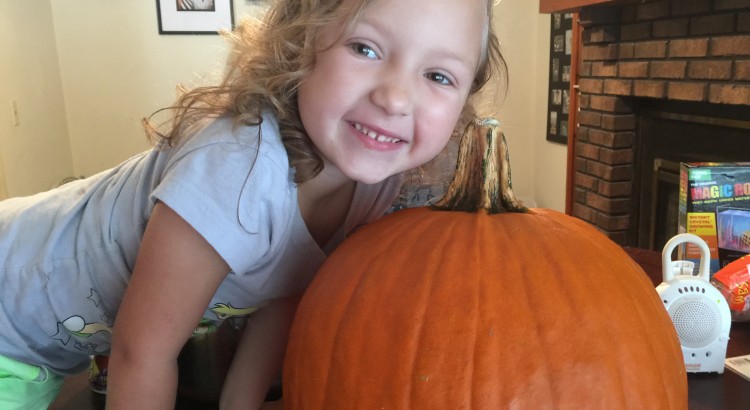 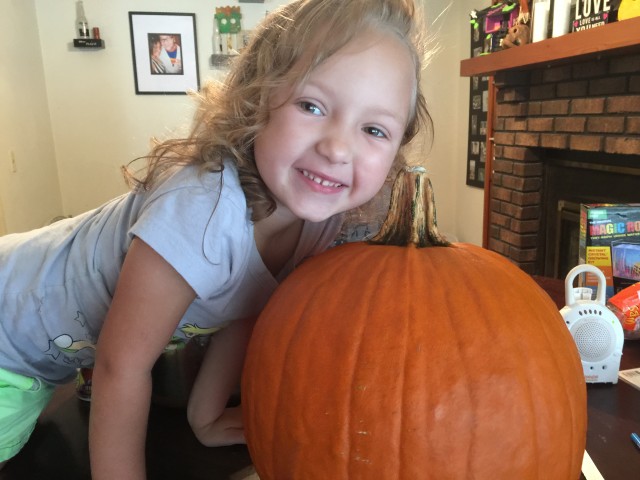 This past weekend my wife went out of town. When I say weekend I mean she actually left Thursday morning, so it was an extended weekend, either way, I was left with the kids alone. I was in single parent mode. This isn’t anything I couldn’t handle. I am a responsible father. I can cook, I can clean. I’ve put the kids to bed and have given them baths before (not in that order of course). This was going to be different though. This was more than a night, this is several nights. It was time to get my game face on and become a super parent.

My wife, Destiny did not have to leave until later in the morning. So she was up and ready to give me a hand getting the kids ready to go to Nanners’ house (my mom). Because I work during the week I had asked my mom if she could watch the kids Thursday and Friday. She happily agreed and the Thursday morning hand-off went as smooth as could be. I even stopped at the gas station and picked up some donuts for the kids while we were on our way. 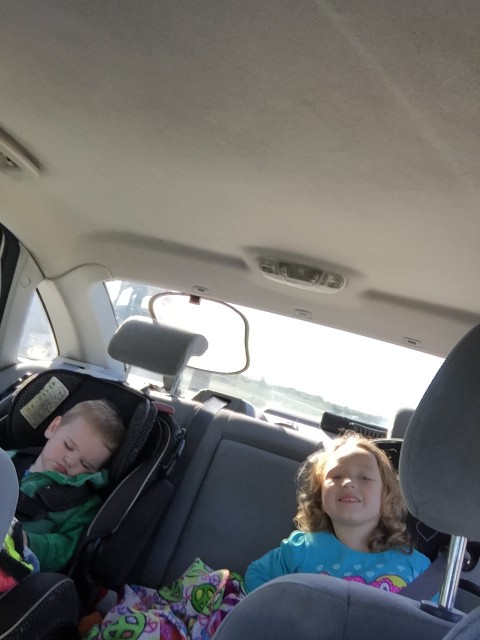 By now, Destiny is enjoying her extended weekend and I am on my way to pick up the kids. When I arrived at Nanners’ house Abby and Alex were both extremely happy to see me. Nanners said they were good, except they didn’t nap, or really eat much. I didn’t think much of it. I figured I would feed them dinner when I got home and then we can play until bath and bed. Boy was I wrong. Alex fell asleep not even 2 minutes after getting in the car. He slept for a good two hours. Abby fell asleep next to me on the couch while we were watching a movie. So I had two kids out for the count. I knew I should’ve kept them awake but I took this as an opportunity to finish my movie, the new Godzilla.

Letting them sleep was not a good idea on my part. They both woke up very cranky. So I did what any super dad would do. I put food in their bellies. It was delicious. The kids ate a lot and both had put the crankiness behind them. So we turned on the Cardinals game and played with some toys until it was time for bath and bed. While we were playing with toys Abby mentioned to me that some kids don’t have dads, and then she told me that some kids don’t have moms either. I told her that was right and then she told me that some kids have two moms. I said that some also have two dads, and she proceeded to ask me “how many… five… six??”. I laughed and told her I had no idea and she seemed happy with that answer. They got their baths and then went to bed without a problem. I would say that night one was a semi-success.

This time I was on my own. I got up earlier than usual so I could get a shower without running late. After I got myself ready I grabbed all of the kids’ stuff to take to Nanners for day two. Once I had all of their stuff ready I woke them up and got them ready. Everything was going smoothly and we were out the door to Nanners. Once we got there I grabbed them and their bags and realized that I grabbed their bags of stuff but totally forgot my laptop bag for work. A little flustered I regained my cool and figured I could make it a day without my regular computer. And I did. 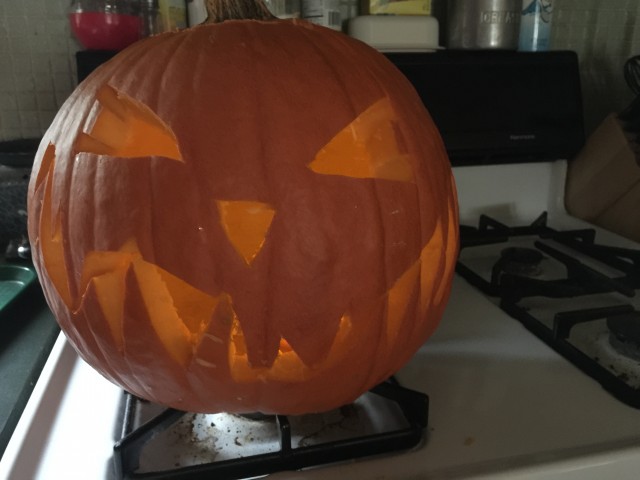 So I picked up the kids and this time they both napped and ate so things were definitely better this time around. I had some plans that evening for me and the kids to stop by my friend’s house warming party but first we needed to pick up a gift and a few other odds and ins. An hour and over budget later we get out of the store and head home to eat dinner.

With dinner done and the kids ready we headed out to my friend Steve’s house warming party. We got there and the kids immediately started running a muck. Steve and his fiance’ were cool about it and the kids got a kick out of circling their house. It helped me out because it definitely wore out the kids. We left and headed home for bath and bed. Abby asked if the Cardinals were playing. I don’t think they were so we watched Jurassic Park instead. She fell asleep next to me again so I moved her to her bed and went and crashed into my own pillows. 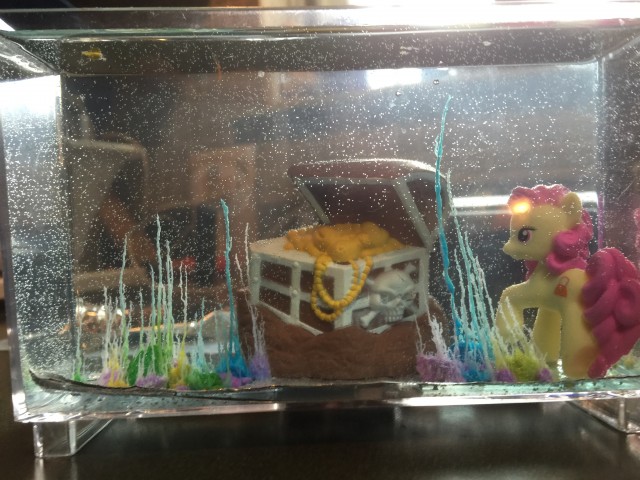 The weekends to me are easier than weekdays. On the weekend as long as you have everything you need at home you don’t have to go anywhere. You can wear pajamas all day if you want. So Saturday was a breeze. The kids woke up, I made a gourmet breakfast and got Alex to take a nap without a hitch. I had picked up a pumpkin and some Halloween crafts the night before so when Alex was napping, Abby and I got to work on the pumpkin. We knocked it out in no time and Abby even dug through the guts getting out some delicious pumpkin seeds to roast later.

We also played with Magic Rocks. If you don’t remember these things, well essentially you take this gel stuff, mix it with water, put these “rocks” in a container and pour the liquid mix over them. After a few hours some stalagmites grow from the rocks. It’s a quick and fun project to do with the scientific curious mind. My problem with it is that for how quick the setup is the payoff isn’t as cool as the picture on the box. 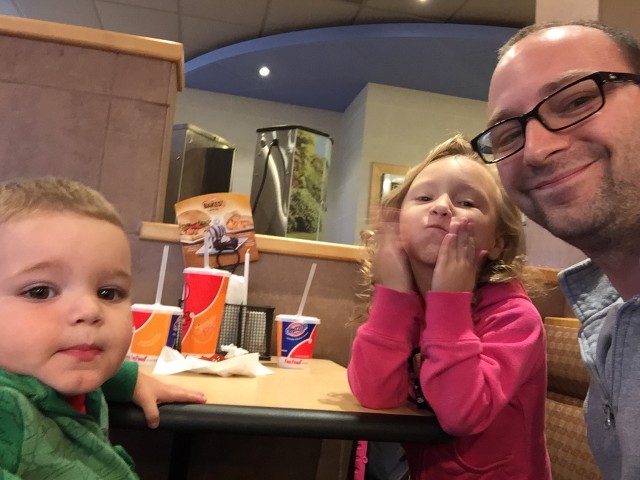 For dinner instead of making the kids something I took them out to eat. I was nervous about how they would behave with me alone, but it all worked out. They both were great. So great we even had some ice cream to share. Since it was the last night they would be under my watch without mom I let them go crazy. I turned up the music (Alabama Shakes) and they were both bouncing off the walls and couches. We took a break to get baths and then I let them go at it again for a little while longer. I could tell they were getting tired when the jumping slowed to a bounce, and then the bouncing slowed to just sitting. So I got them in bed and enjoyed the rest of the night cleaning up.

So what does all of this mean? Well for starters it means that mom shouldn’t feel like dad can’t handle it. Sure we might screw up and forget our work bag, but it happens. I know my wife can forget a thing or two when she also has a million other things to remember. But as parents we make it through and the kids eat, they get their baths, and they go to bed happy. Another thing I learned from all of this is that I have a new found respect for single parents of multiple kids. It was a fun but difficult weekend. I love my wife and I wouldn’t mind if she went out of town again, because I know I got this handled, but maybe we can wait a few months before that happens… 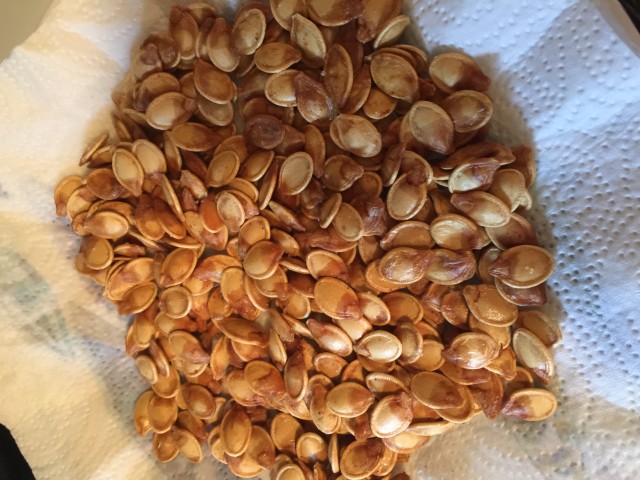 Oh you wanted to know how I cooked the pumpkin seeds? Preheat the oven to 300 degrees Fahrenheit (150 degrees C), wash the seeds in water, drain water, toss seeds in a bowl with a 1/2 stick of melted butter and salt. Then spread seeds on a baking sheet and bake for 40-45 minutes or until golden brown. You probably will want to flip the seeds around every once in a while.